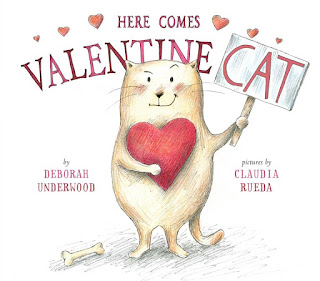 The fourth and perhaps my favorite in the Cat series. I like Deborah Underwood's comment on the book, appearing right after the attacks in Paris in November: In an attempt to bring a little love into what appears to be an increasingly hate-filled world, HERE COMES VALENTINE CAT touches on the perils of making sweeping and hostile judgments about those you don't know (in this case, a d-o-g is involved).

Here is the dog involved: 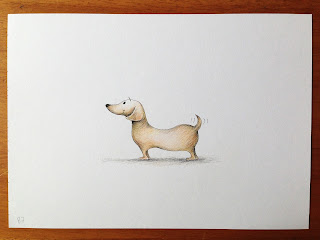 And here some of the generous reviews:

From the School Library Journal:

In this creatively presented holiday title, an unidentified narrator speaks directly to Cat, trying to convince the disgruntled feline to make a valentine for a friend. The narrator insists that the holiday "doesn't have to be all mushy." The conversation continues with Cat communicating through eloquently illustrated signs. One sign shows a particularly dastardly portrait of Cat's new canine neighbor. Cat automatically rejects the idea of sending a friendly valentine to Dog. Dog is noisy and keeps throwing things over the fence. Cat vehemently clings to the opinion that dogs are mean and undeserving of Valentine's wishes until an unexpected event changes everything. The humorous ink and color pencil illustrations of the stout, sand-colored kitty will endear Cat to young readers, and they will appreciate the lesson Cat learns: don't jump to conclusions about your friends because everything is not always as it appears. VERDICT The story's singular narrative style and simple but expressive illustrations will make it a favorite during the month of February.
Publishers Weekly, starred review:
Wickedly fun as ever—Underwood and Rueda clearly know how well sweet and salty go together.
From Kirkus:
Underwood's endearing, voiceless cat is back, this time getting a lesson in Valentine's Day tact. . . . Rueda masterfully uses white space and Cat's facial expressions and body language . . . for beautifully pitched comic timing. Cat hasn't lost his ability to charm readers, if for no other reason than children are so able to see themselves in him.